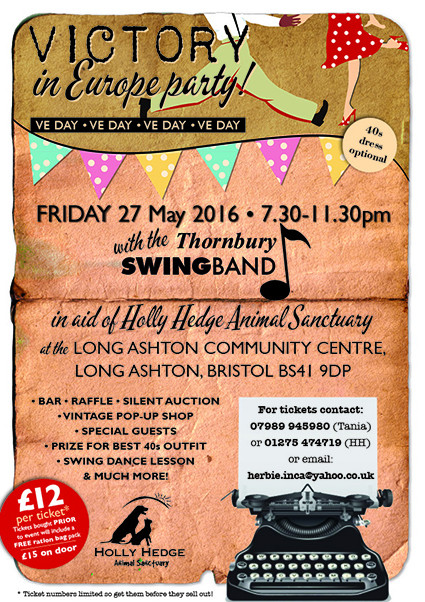 I work as a graphic designer at Local Pages and I have channelled my creativeness into fundraising for a few charities during my spare time. One of these charities is called Holly Hedge Animal Sanctuary, based in Barrow Gurney, near Bristol. They rescue abandoned, abused and unwanted cats and dogs and re-home them to local, loving families. Animals have always been a BIG passion of mine, along with an insatiable appetite for finding out all I can about World War 2. I have a profound compassion for ALL animals as well as for the men and women who beat the threat of Nazi Germany. These two interests have combined to help me create a fundraising event which has become hugely popular.

My annual “Victory in Europe” fundraising party is held in May or June each year. This year, we have hired a band called the Kookie Ukes, and also a 15 piece orchestra called the Thornbury Swing Band who play all the traditional numbers from the big band era of music – think Glenn Miller and the like. The event is well attended by swing dancers too. It’s a very energetic form of dance, so plenty of room is needed on the dance floor where you can see some ladies being thrown up in the air! We have a “spiv” character – “Lucky Uncle George” – who is going to do a basic and fun dance lesson at the beginning so everyone can join in.

We also have our very own Normandy Veteran coming along called Reg Charles, who will give a 10 minute talk on his experiences in the infamous 1944 “Battle of the Bulge” in Normandy. He has also agreed to play the piano for us during the interval so that we can have a wartime sing-a-long; tunes like “Hang out your Washing on the Siegfried Line”. It truly is an evening for young and old. Some people come dressed in the fashions of the 40s – as pilots or soldiers, or in everyday attire. We have a NAAFI-style van parked up next to the venue selling teas and coffees as well as delicious homemade cakes, all served up by a couple who dress up in authentic civilian clothing from the era.

We also run a silent auction on the night where lots can range from a 3-day holiday in Normandy, to beautiful 40s-style posters signed by Normandy Veterans. Last year, I managed to obtain a poster signed by the last surviving Dambuster, a local man, and this fetched a massive Â£156.

Each ticket holder also gets a “ration bag” when they come into the bunting-festooned hall. The ration bags are yet to be decided but will most probably contain a ploughman’s or a pie along with “salt n shake” crisps which were true to the era. I have bought a Kit Kat for each ration bag, taken off the modern day wrapper and recreated the wartime wrapper. I have also made caramelised apple jam for each bag as the wonderful ladies of the WI used to do. Detail is of the utmost importance to create the right atmosphere. I deck the hall with moral-boosting posters from the war too. As a graphic designer, I find it a handy skill to have when organising something like this. We have an actor do the announcing between the bands and the various activities, reading out the cues in his very best ‘Received Pronunciation’ voice.

I was born decades after the war, but you can’t beat the music of Glenn Miller, and the incomparable Frank Sinatra – the big band sound transports you back to a bygone era where local communities pulled together in everyday life as well as business, fashions were fabulous and the spirit of the nation was strong in spite of the hardships. Long may we remember the people who gave up so much for our freedom!

The fundraising event will take place on Friday 27th May 2016 from 7.30pm-11.30pm at the Long Ashton Community Centre.

Nestled in the heart of the Thornbury high street Just 12 miles North of the Bristol City Centre,... Read more...